My 6th graders were getting ready to start a Social Studies inquiry on China so I thought it would be cool to lead them on some guided expeditions of things like the Great Wall of China and get them familiar with the landscape, history and culture of China. Not only would it give them some background knowledge to draw from during their unit, it would hopefully get them more excited about learning even through their inquiry.

The first thing I did was download the app to my phone and tester iPad in the library (we’re no longer allowed to download and delete iPads from our teacher iPads on our own. We have to put those requests through help desk. If we want to test out an app there is one unlocked tester iPad in the library we can use.). Later at home, I convinced my husband to be a student and help me test out the guide/explorer format (Side Note: Every time I opened my camera app to snap some pics of what was happening on my screen, he would get disconnected from the guide but not until I tried to go back to Google Expedition. So if you want to try this with your classes and would like to get some photos or videos of the experience, you’ll have to have someone else be in charge of that with a separate device. Otherwise, it will really slow down the expedition). I loved that the expeditions have built in points of interest and questions for the teacher guide to prompt/ask the students. I also loved that they were scaled in rigor so you could adjust the questions for your students/classes as necessary. My husband thought it was cool that the explorers are guided to look at what the instructor wants them to look to help keep them on track and I loved that as the teacher, I get feedback from the app on how many student explorers are following along and looking where I want them to be looking (seriously, how do they do that!?!?). Since I only had one student explorer testing it out with me, I’m not sure if there is anyway for it to indicate who isn’t looking where they are suppose to be looking or if you just look around the room and see who’s looking in the wrong direction.

You may have noticed that my last sentence implies that I never used Google Expeditions beyond that testing session at home with my every patient husband. That’s because I never did get to use it with my 6th grade classes. At school the next day I wanted to test it out one more time before I formally requested the app be installed on the library iPads (when we want an app that installed that isn’t already on the preapproved list, we have to fill out a form to request that it gets added to the pre approved list and then, if they notify you it made the list, you can request it be added to the iPads you want/need it downloaded to.) The form asks you all sorts of questions about your testing out process so I wanted to test it again as I filled out the form so I could answer completely and accurately. Except, I could no longer get the app to work. 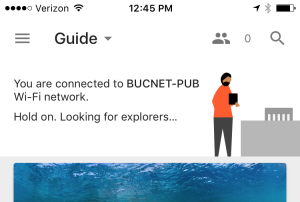 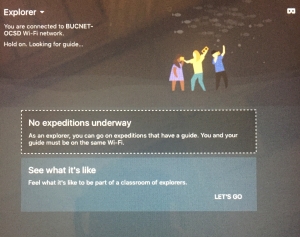 So, as it turns out, the settings on the wifi used in our building blocks the devices from being able to find each other and makes it impossible to use Google Expeditions as intended. I’ll be submitting a form asking them to change that but, I’m not expecting a speedy resolution, if I get one at all.

I then looked at some of the other options I had learned about in this tool, namely Google Cultural Institute and Google Maps Street View Treks, to see if they could substitute for Google Expeditions so I wouldn’t have to scrap my idea entirely.

Google Cultural Institute is a swell idea but, to get the most out of the videos, you still need some kind of Google Cardboard viewer and I don’t have those (and can’t afford them or get them here in a hurry) so that kind of takes some of the wind out of the sales on that site. You can view the videos on a computer and move around within the video image but it definitely losing something sharing it on the larger smartboard or even computer screen. (Although, it wasn’t much different viewing them on the iPad than it was doing the Google Expeditions on the iPad.) It’s also a great resource for museum style resources in the comfort and convenience of your classroom-they had a great collection on The Art of Chinese Crafts. Most of the videos though were of museums and not the actual landscapes and major attractions (like the Great Wall expedition I had wanted to take my 6th graders on). If you’re looking to bring the museums of the world to your classroom and/or don’t mind pre-recorded Expedition style videos, this is a great resource for classroom use and has tons of topics from tons of places. But, it didn’t give me that free form exploration feeling I was looking to get (and didn’t have any videos I could find on the Great Wall).

So I moved on to Google Maps Street View Treks instead. I was definitely let down by this one more than the Cultural Institute. The Cultural Institute had plenty to offer, it just wasn’t exactly what I was looking to find. Google Treks was surprisingly sparse in comparison-there are currently only about 20 locations available. For those locations you can see some cool videos and some panoramic photos but it’s not as self guided as the Google Expeditions. Plus, I found it incredibly frustrating that when I clicked on “Explore in Street View” instead of taking me to the street view map for the location I was actually viewing (in this screenshot, the Eiffel Tower), it would just take me to a general landing page for Google Street View-and there was no way to search for the location I had been at and wanted to view in Street View!

In the end, I scrapped the lesson entirely and went a different route. The music teacher and I were going to collaborate on an end of year project for 5th grade so I reached out to him about modifying it slightly and doing it with 6th grade as well. While there are certainly some cool options out there and I probably could have made something work from Treks and/or the Cultural Institute, in the end what I really wanted to do was a Google Expedition and I decided if I couldn’t, I’d rather just do something else entirely.

A Little Birdie Told Me….

More of Me to Love